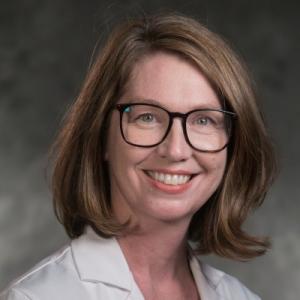 Penni had plans to work in the state park system and started with a job tagging sea turtles in Hammocks Beach State Park. Family sidetracked the plans and at the delivery of her second child with a midwife, she knew she wanted a new career path.  She went back to school for her graduate degree after both of her children were in school. After graduation with her MSN, she moved to Nebraska to work as a midwife with Hispanic immigrant women at One World Community Health Center from 2009 to 2017. She also had the opportunity to work with the Creighton University residents and accompanied the medical students to the Dominican Republic in 2015 to assist with gynecologic care of women in the ILAC center and in the Bateyes.  She recently moved back to NC to work in the Duke Birthing Center and to be closer to family. She is enjoying being able to hike in the forest again with her dog, Basilio.

Yale University School of Nursing: Nursing Diploma, Masters of Science in Nursing with certificate in midwifery, 2009